FREE DELIVERY from 46€ in relay points and from 58€ of purchase at home.
[MY] Regenerating face oil in your order from 75€ of purchase (Click on it to add it to the basket)

Take advantage of a 10% discount on your first order and receive the Hormonal Balance Guide (PDF 36 pages) by subscribing to the newsletter.

Perimenopause: the little-known symptoms of menopause

The unknown symptoms of perimenopause

If menopause is a known and openly discussed issue, perimenopause is one of the less explored female subjects. Perimenopause, the period that precedes menopause, occurs on average between the ages of 35 and 40 and can last 15 years. When we talk about perimenopause, the first thing that comes to mind is the disturbance of menstrual cycles, the second, hot flashes. Butother symptoms, often unrecognized, altering the quality of life can occur during this period of great upheaval in the lives of women. 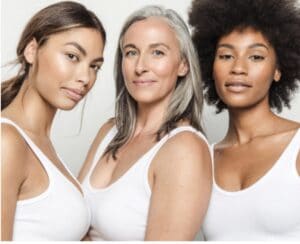 Perimenopause is the period before menopause, the very first symptoms can start between 35 and 40 years for most women.

This period, which can last up to 15 years, is characterized by the depletion of the number of ovarian follicles, the small sacs that contain the eggs, accompanied by a gradual decline in the levels of female hormones (progesterone and estrogen).

This will cause a hormonal imbalance resulting in many symptoms that herald the menopause and will disrupt the quality of life of women.

It is a period that is sometimes more difficult for women to live through than menopause, which, once it has set in, will lead to hormonal stability followed after a few years by a true period of calm.

During this period, the most common symptom is undoubtedly irregular periods, different from those experienced up to that point. They can disappear for a month, two months,… and then reappear. They can also vary in their usual duration or flow.

It is important to know thatwe talk about menopause from the moment when 12 months go by without menstruation.

Among the other symptoms of perimenopause, we will also frequently find :

These symptoms can set in during this perimenopausal period and then continue during menopause.

It sometimes happens that some women suffer from perimenopausal symptoms that are less frequent or even unknown.

The decrease and then the stop of the production of estrogen and progesterone lead to a decrease in the muscle tone of the perineum. In some cases, this can lead to small leaks called urinary incontinence.

There are two types of incontinence:stress incontinence (which can be caused by sneezing, coughing, laughing or carrying something heavy) and bladder incontinence (caused by irritation of the bladder which contracts without having received a command from the brain).

Hormones can affect the composition of eye tissue and alter tear production. When estrogen decreases, the eye can become dry and less elastic. The eyes then become irritated and dry, and vision can become blurred. Postmenopausal women also have a higher intraocular pressure with the risk of glaucoma.

The brain contains estrogen receptors that help it function better and contribute to memory and verbal fluency. When estrogen levels begin to decline, some women may experience memory problems with everyday issues or concentration… fortunately, these problems are usually completely resolved by the end of menopause.

We talk a lot about hot flashes during this period of women’s lives, less about cold flashes! The sensation of cold is the result of messages of excessive heat received by the brain. In order to eliminate the heat, the body will react by sweating more. It is the sweat that will cause chills.

The decrease in estrogen reduces the production of mucus, even in the mouth. The mouth becomes drier, which modifies the taste buds. The perception of taste can then be altered with a sensation of bitter or metallic taste.

The carpal tunnel syndrome corresponds to a compression of the median nerve located in the hand, which will generate sensations of tingling, pins and needles and a decrease in muscle strength.
If this syndrome appears most of the time during the aging of the organism, it can also appear when the body undergoes an important hormonal upheaval.

Pain and discomfort in the lower abdomen persist in many women during perimenopause and even after menopause. Women may experience lower abdominal pain that can radiate to the lumbar region, as well as to the thighs, as a result of contraction of the uterine muscles, which compresses blood vessels and reduces oxygen levels in the tissues. With the onset of menopause, these pains can intensify, especially the associated bloating and heaviness, often with weight gain in the belly.

There are several causes of lower abdominal pain during premenopause/menopause:

It is then advisable to turn to detox cures to lighten the belly and / or consumption of fiber and probiotics that can also help.

Relieving the symptoms of perimenopause

Itis important to know that the treatments administered during perimenopause are not intended to delay menopause, but to relieve it. These hormonal treatments, which can have serious consequences for health, are more and more rarely prescribed and will only be used in the case of serious problems.

Today, many women are looking for an alternative, natural treatment and do not wish to take hormonal treatments.

Unfortunately, some natural treatments can also be harmful to the body, especially soy-based treatments which contain hormones. It is therefore important when looking for a natural solution to carefully check the components and avoid controversial ones.

In order to help and support women, especially during the peri-menopause, MiYé has developed various products made up of 99% natural and organic active ingredients, without controversial ingredients, tested under medical supervision and manufactured in France, such as [MY] Infusion Concentrate Happy Cycles or food supplements such as [MY] Female Hormone Balance.

[MY] SOS Mist is designed to moisturize, refresh and protect the skin from free radicals. It is intended for women who spend time behind their screens, but also and especially for women who see their skin change during their cycle and/or who suffer from hot flashes and redness. Ideal for reducing the frequency and intensity of hot flashes!

The perimenopause is a period that really needs to be taken into account, as the symptoms it causes can affect a woman’s quality of life. However, whatever the problems encountered, there are now promising solutions to improve women’s daily comfort. Nor should we lose hope since most, if not all, of these symptoms disappear at the end of menopause ✨

Learn how to better live the perimenopause with our live chat with Cécile Pétureau, naturopath ! 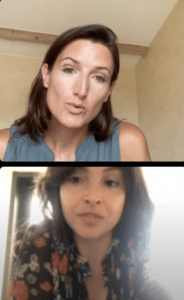 Do I have excess cortisol? How does stress affect our health?

What is estrogen dominance?